AngularJS is a JavaScript-based front-end web development platform that is extensively used to build modern interactive web apps and online marketplaces. The popularity of AngularJS frameworks, as well as the popularity of its developers, is expanding. In the United States, a junior Angular web developer gets $98,000 per year, or $50.26 per hour, a senior expert $140,000, or $71.79 per hour, and a mid-level Angular developer earns $114,543, or $58.74 per hour. Angular developer salary depends on their skills, working hours, and location. Before deciding to employ offshore angular developers, consider your budget, the wages of developers in different locations, and the availability of expertise in these areas of interest. 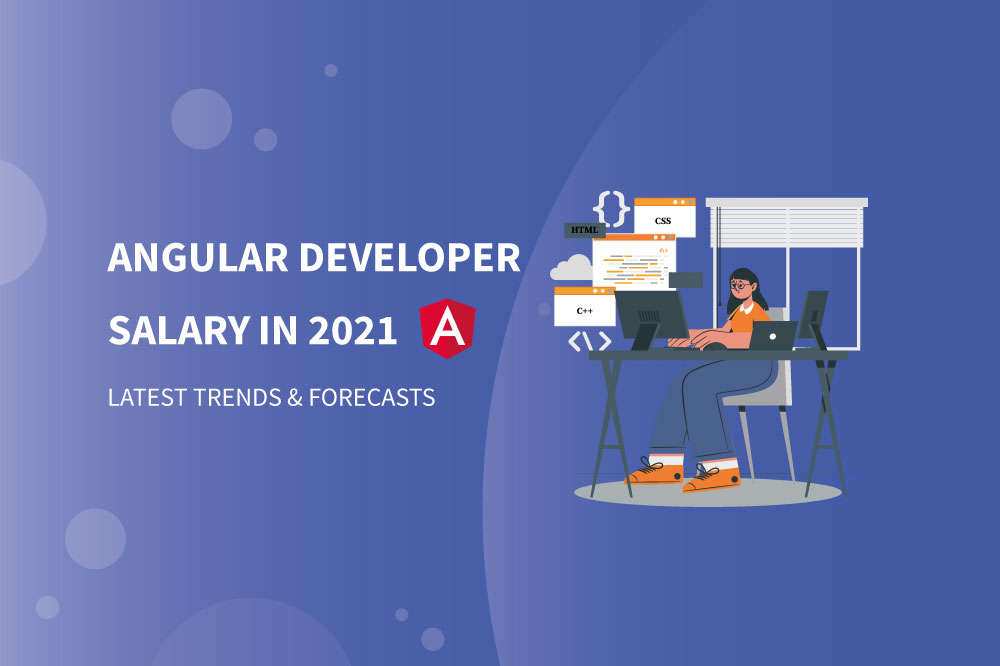 Angular as a Web Framework

Angular is an HTML and TypeScript-based platform and framework for creating single-page client applications. Angular is a component-based framework that allows you to create scalable web apps. It includes a set of libraries that enable functionality like as routing, forms management, client-server communication, and more, as well as a set of developer tools for writing, building, testing, and updating code.

Why are Angular Software Developers in demand?

With rapid software release cycles, the popularity of this framework is growing rapidly and used by mobile app companies, web developers, and others IT organizations. With popularity, the JS companies and developers have stepped up to meet the market demand. Development of modular capabilities, large-scale libraries, and various advanced featu res are made possible with this. Here are some features behind the high demand for Angular developers:

Angular developer salary in the US, Australia, Western Europe, and Israel make the most than other coutries. The annual salary of a junior Angular developer is $98,000 per year, a senior developer makes $140,000, while a middle-level Angular developer earns $114,543. India’s talent pool is rapidly growing, and the quality of the services remains high which makes it the best outsourcing destination.

Angular Developer Salary in the US

Angular Developer Salaries in the US by State

Angular engineers in Great Britain get a cash compensation of $7,436/month, Norway $5,719/month, and Denmark $5,586/month. Angular developers in Europe make $46,140/year in Germany, $61,963/year in the Netherlands. India is the most cost-effective country in terms of developer salaries.

Angular Developers’ Salaries in the UK by City

Israel comes third in paying the highest salaries for JavaScript developers specializing in React, Angular, or Vue.js frameworks. The Angular developer salaries depend on their expertise in Israel and earn $71,677/year on average.

Angular Developers’ Salaries in the Netherlands

Angular Developers’ Salaries in the Norway

India offers software development firms a cost-effective outsourcing choice; nevertheless, geographical distance, time zone variances, and cultural differences must all be considered. In 2020, the IT industry will account for 8% of India’s GDP. According to Nasscom, India would generate $300-350 billion in yearly income by 2025. India is the ideal alternative to consider if you are seeking for top-notch developers at inexpensive prices with high-tech talents, technical infrastructure, professional experts, and emerging engineers. The IT business in India is booming, and it’s transforming the face of the Indian economy. India has the world’s youngest employable population. Every year, some 200,000 IT graduates enter the Indian workforce. Professionals in India work hard to better themselves in accordance with the most recent technology in order to fulfil increased demands. This is what makes India one of the best offshore destinations for tech services. Developers’ hourly pay in India is evidently lower without compromise of quality and standards than in other countries.

According to the data provided in this article, the US, Canada, and Western Europe top the list in paying the highest salaries to Angular developers. The most cost-effective country is India where a senior Angular developer makes around $19,430/year i.e, $10,11/hour, a mid-level specialist earns $15,430 i.e, $7,42/hour, while a junior developer makes $11,470, with $5,97/hour. Salaries are way lower than in Western Europe and the US, without compensating the quality of results.

India’s hourly rates are only one-tenth of what they in the United States, while also providing good outsourcing services. At present, India is one of the best destinations for tech services. Outsource your IT requirements to India and save money! Only India offers a population of devoted tech developers with the skills to fulfil all of your requirements. There are always compromises but never with us. Start now with Centizen Talent Hub.