Skip to content
Java Developer salary – US vs the World

Java Developer salary – US vs the World

Java has been steadily improving its programming abilities for decades, and it is now one of the most widely used programming languages built to work across every platform. Without a doubt, the world of software development would be a barren wasteland without Java. Building Android apps, Java web applications, software tools, and scientific applications are just a few of the key areas where Java shines. Java boosts a developer’s chances of landing a job.

If you need to hire Java Developers from the US, the average salary ranges between $81,380 – $108,420/year. If you are interested to know more about Java Developer’s salaries, this article will help understand Java Developer salaries across the globe. 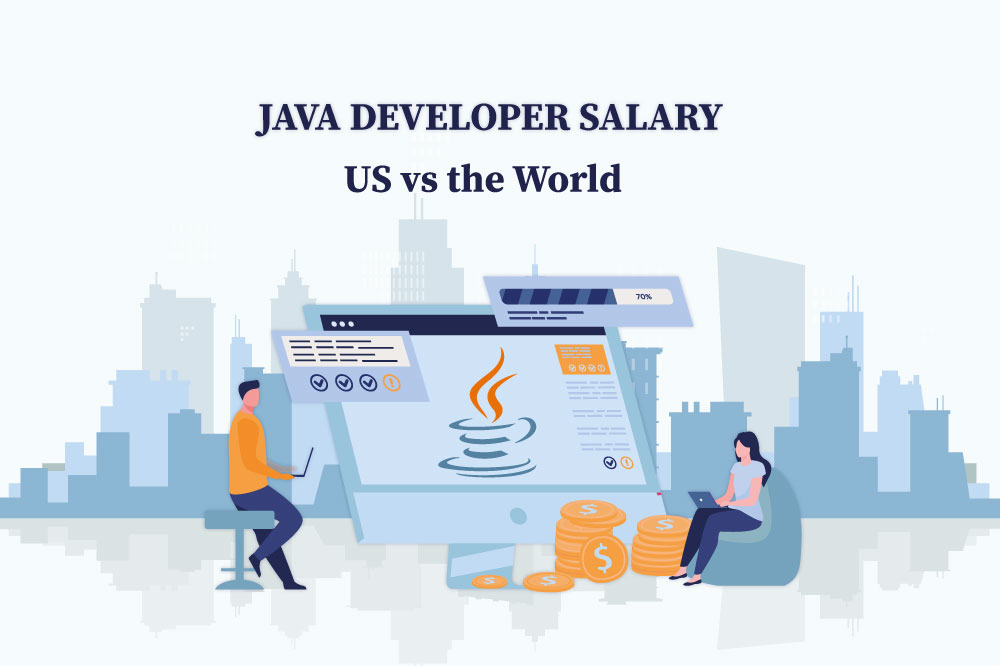 Java and the Java Developers

Java is an object-oriented third-generation, most popular, and loved programming language for developing cross-platform apps and websites with a striking 9 million developers. It has been one of the most popular programming languages since 1995 for its versatile nature and compatibility. Java Developers are specialised programmers who are an integral part of a software development team to build, design, and manage the entire process of application development to ensure effective and efficient development. The TIOBE 2021 Popularity Index survey done across the world reveals Java is one of the top most popular languages used by developers. The survey done by Stack Overflow reveals it as the 3rd most popular language in the world. Undoubtedly, the world’s top brands like Twitter, LinkedIn, Amazon use Java to build a cohesive infrastructure for its dynamic Personality. With respect to the other programming languages, companies prefer Java and the java developers are among the highest paid across the globe.

The Java Developer Salary in the US mainly depends upon your experience, the skills that you possess, and the location where you are working. The average Java Developer Salary in the US mainly depends upon the developer’s experience, skills, and Location. Based on the experience, the junior-level salary in the US is 20% less than the average, and depending on the skills and the location, the percentage varies between 15% – 19%, and 1% – 17.5% on an average respectively. As per Indeed, the average Java Developer salary pay in the US is $96,145/year, and the maximum and the minimum range holds between $81,380-$108,420/year. According to Salary Expert, the average salary is $7,172/month and $64.95/hour. In addition to the salary, developers may receive a minimum bonus of $5000/year, for their performance.

Based on the Location,

As per the records, the cost of hiring US Java developers is quite expensive. As Java developers are one of the highly paid tech jobs, let’s analyse the average salary paid for a Java Developer in other parts of the world like Switzerland, Denmark, Australia, etc.

The average salary in Switzerland is $95,095/year that includes the benefits like housing, transport and other such categories based on the developer’s experience, skills, gender, and the location. On average, the tax payment is 25% less than in the other European countries.

Compared to the US, Switzerland or Israel investing in Nordic countries is less expensive, but the pay seems too high compared to the cost of Eastern Europe. The average Java developer’s salary in Denmark is $76,080/annum or $24,87/hour.

The IBIS world research reports that the software development of Australia grew by 11.4% annually for the past 5 years. This trend will continue for the next 5 years. Due to this tremendous growth, the average Java Developer pay is around $59,643/year or $35,68/hour.

In short, let’s compare the average Java developers rate based on their experience to justify why businesses are looking forward to hiring Indian Java Developers.
.

Over the years, the immense growth of India in the field of IT hub in all these years has resulted from the reputed app developers focused on developing software and app projects to provide development services to businesses worldwide. The increase in popularity of Indian remote developers is still at the top for its cost-competitive rates, Quicker Development time, seamless project management, and Unlimited experienced and reliable Talent Pool. In India, it is easy to find Targeted specific programming skilled developers who are well adaptable with cutting-edge technologies. Literally hiring remote Indian developers ensures a never delay in the development process, as the project is in action whole through the day and night.

The average Java developer salary based on experience is listed below:

If you’re a Java Developer, you’re in one of the most critical positions on a software development team. As a Java Developer, works on a variety of software products like applications, mobile apps, and that’s not all. They also design, co-develop, and manage the software development process to ensure smooth and efficient development. Hiring the best remote Java developers is as important as hiring an in-house team. The recruitment process either makes or breaks your team, so it is best to take time to hire the best fit for your needs. But the reality is, businesses are running out of time, and Centizen Talent Hub, an offshore recruiting platform, hires the best cost-effective Indian remote developers in the least time and effort possible. Well, use the opportunity to stay more confident in the race of acquiring tech talents in the Software development industry.